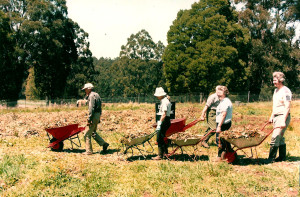 History of The Ferny Creek Horticultural Society and Ornamental Gardens

1932
May – A public meeting of local citizens was held in the Log Cabin of The Ferny Creek  Recreation Reserve. It resolved to form the Sassafras and Ferny Creek Horticultural Society for the purpose of holding horticultural shows in the spring and autumn.

1937
Horticultural shows were organised. These were often affected by drought. The late 1930’s established the Society as a recognised organisation and placed us on the map.

1947
Committee decided to move to the three shows per year in April, September and November.

1952
It was decided that the society name was unwieldy. The Society was now to be known as ‘The Ferny Creek Horticultural Society’.

1956
Society sought 4 acres of land to be set aside from the Ferny Creek Recreation Reserve for the formation of a garden.

1958
Four acres were planted and known as the Ferny Creek Ornamental Garden Reserve.

1967
Department of Crown Lands agreed to excise a further 6.5 acres. The Society now totalled 10 acres of land. In this year it was decided to review the possibility of building our own purpose built show hall.

1969
Our hall was built at a cost of $30,000. Society funds plus donations from members was used to fund this ambitious project. In this year all Society shows were moved from the Ferny Creek Recreation Reserve pavilion, which had become too small, to the new hall.

2002
Society upgraded the kitchen to comply with Health Regulations.

2005
Toilet block was remodelled and a non-ambulatory toilet was added.

2007
The Society celebrated its 75th anniversary. This included the hosting of a large number of functions, including: The ‘Plant Collectors Sale and a Garden Expo’, ‘Down Memory Lane’ and the creation of a native garden section. The Society also received a $22,000 grant from the Federal Government for the construction of water features and the installation of new water tanks.

2010/11
Construction of the multi-purpose room.

2012
The Society celebrated its 80th anniversary, with a special lunch held in May. To further commemorate this event, a gazebo was erected in 2013 amongst the protea beds.